I think it is time a new Dune computer game should be released. I first started reading Dune after playing Dune 2000.

More strategy games would be nice. I cannot find Emperor: Battle for Dune. I want more House Ordos! Since they only appear in the games and Kevin and Brian refuse to write them into their books since they believe their books are in fact cannon.

A new adventure/role playing game would be even better. But not as Paul overthrowing the Harkonnen and the Emperor again. Perhaps play as a Bene Gesserit. The game does not even have to be based on anything that happens in the books. There are so many places and people in the Dune universe the ideas go on and on.

Yes, Kevin as well as Brian will be executive producers. I'm pretty sure by now that BH and KJA have done things worse to Dune than introducing House Ordos in a game that doesn't claim to be canon.
If I ever stopped writing, my head would explode.
Top

I was just wondering if the Dune computer games are really products of the HLP or did the real game creators just get permission to make games based on the Dune universe. The first game of course was released in 1992 before Kevin took control.

Now that I know that Kevin wants to produce the new Dune movie, I ask does he also want to take control of making new Dune computer games. I know few of you here are fans of the Dune computer games (I am though), but I know how much worse it could be if Kevin gets on board.

Edit: The two mini series were also not from the HLP I guess. Did Frank himself have anything to do with the production of the 1984 film?
Last edited by Nebiros on 06 Apr 2009 06:40, edited 1 time in total.
Top

Apart from selling the license HLP have had no direct involvement with the production of any Dune based video games to date.
Top

Something like Planescape:Torment but for the Dune world would be great.
Top

If the HLP or KJA has a say in this, the game will only be played in God mode...

Nebiros wrote:By the way, do Brian and Kevin have the rights to the computer games?


Essentially. It would be more accurate to say that the HLP controls any and all Dune media, but since it's now apparent that "HLP" pretty much means "we handed the keys to Kevin J. Anderson," I'm not sure accuracy means much.

I would bet money that KJA, at least, would demand some sort of credit for any new Dune game, much the same way that he's talked Berg into letting him be a movie producer and much the same way that he and Bobo got writing credits for the short-lived Dune RPG. Also, it seems apparent that, for better or worse, the HLP is betting heavily on the new Dune movie and has very little interest in any other projects right now (other than Hacky hiking out eactly one book per year, of course).
"Anything I write will be remembered and listed in bibliographies on Dune for several hundred years ..." — some delusional halfwit troll.
Top

TheDukester wrote:and much the same way that he and Bobo got writing credits for the short-lived Dune RPG.


Looking at the pdf of DUNE: CHRONICLES OF THE IMPERIUM and I can only see them credited with being Creative Consultants for what it's worth, Oh and Herbert jr w.r.o.t.e. the introduction apparently.
Top

Edit: SP
Ah English, the language where pretty much any word can have any meaning! - A Thing of Eternity
Top

I downloaded a fan-edit that includes all the deleted scenes released so far. Better still.

^^^Which one, Spicediver's or that big ass DVD9 one, I can't remember who did it.
Top

Spicediver? Not heard of that one.... What;s the difference?

IIRC they are both aiming for the same goal, that being a more complete telling of the Dune story using Lynches available material. The one you have I think is by 3rd stage navigator is just better done, it's up there with adywans Episode One.

Bumping this old thread because, I really feel that either a new game or new movie would really renew my interest in all things Dune. We all know the new books are shit and the movie was canceled. It took a video game (Dune 2000) to get me to be a fan of Frank Herbert's Dune, it will take a film or game for me to re-read the original six books again.

Right now I'm more of a fan of 'A Song of Ice and Fire'. And that's because of the TV series.
Top

I have brainstorming a few DUNE inspired games. I conceived a DUNE III RTS which continues the story of the first DUNE game and takes to a whole new and chaotic story direction. I also had an idea for a DOS styled FPS/RPG in the vein of SYSTEM SHOCK, TIE FIGHTER, and STAR WARS: DARK FORCES, which involves a Bene Gesserit assassin tasked to stop of another bad House from messing up Arrakis's ecosystem for the worst. Someone did try to do a DEUS EX mod based off of DUNE, but that crumbled apart sadly. I really wish the company which developed the FRANK HERBERT'S DUNE (the game adaption of the miniseries) didn't screw it up, since it aimed to try to emulate the gameplay experience of METAL GEAR SOLID and perhaps TENCHU: STEALTH ASSASSINS (their attempts fell flat).

If Brian Herbert and Kevin J. are producing a new DUNE game, they better get some skilled developers to make the game good enough so that their bad writing could be overlooked. Perhaps another writer will be commisioned to build upon BH and KJA's "outlines" (because their writing pretty much is in outline form).
'...all those who took part in the rise and fall of the Dune project learned how to fall one and one thousand times with savage obstinacy until learning how to stand. I remember my old father who, while dying happy, said to me: "My son, in my life, I triumphed because I learned how to fail."' -Alejandro Jodorowsky
Top

Don't try egging me on to making vlogs that you have no intention of watching. If on the other hand you really miss it, just check out my Youtube channel (you know how to find it). There's plenty of new stuff. I've even learned how to edit a little.
Top

I don't need a new Dune game, Cryo's 1992 Dune is all I could ask for.
But then, I'm also a an old-fashioned type who generally don't like new games anyways. I prefer pre-2000.
Top

I want a 'thopter simulator.

Think I found Emperor, The battle for dune on amazon for 15 bucks, might order tomorrow. I have the others, havent played in ages but they were years ahead of their time (features and functions, etc) compared the RTS games that game after.

As for a new game, there are so many models out there its scary.

1. An RTS game based on the time before Paul, when the Fremen and Harkonen's were on Dune.

2. A Roleplay Game, based just about any time frame, and any person you wanted. Hell a game based on the Scattering,
during Pauls Reign/jihad, leto's early/latter(fishspeaker stuff) days. Sky is the limit.

Why they haven't done it already is beyond me. Hell if there is any genre the twits could write in it would be space opera type game scripts.
"Long Live the Fighters", "Dragon.....the other white meat."

Not a new game more of an oldish mod that may have missed your attention.

I wonder if Brian's fear of the internet has anything to do with the HLP not
selling the rights for a video game ?

maybe all the game developers are well aware of what a pain in the ass Kevin is,
and have already made it known they'd not want any part of a "Dune" that came
with a comb-over .... 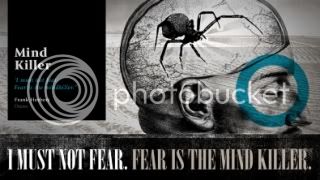 I personally feel that this message board, Jacurutu, is full of hateful folks who don't know
how to fully interact with people. ~ "Spice Grandson" (Bryon Merrit) 08 June 2008
Top
Post Reply
30 posts