The reprint of the 1979 Avalon Hill board game has been released by the firm GaleforceNine. Of course I had to buy it. I also have a original copy of the 1979 game in good condition. 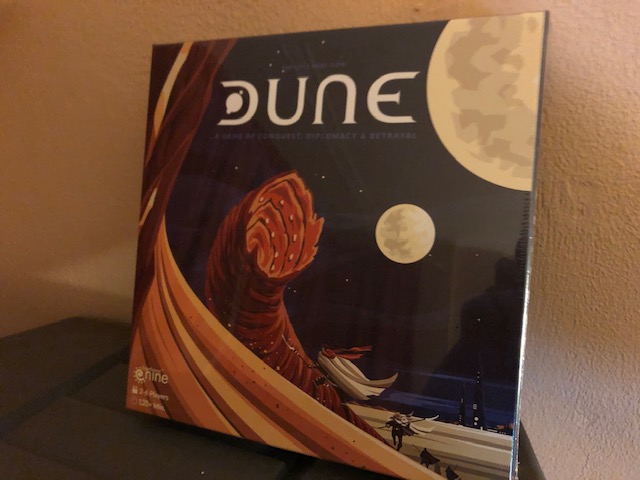 This version has new art with a more contemporary look than the '79 edition. The gameboard is nearly exactly the same, at least in size. It is decently priced ( € 50,00 ). If I wasn't a Dune fan I don't think I would have bother to buy it. Through the years I have played many a board game with some stunning looks. I name Scythe as an example. Finding others to play Dune is also far from easy. It is a complicated game in which treason and betray is of great influence and not many players like to have this in a game. The board game Diplomacy is another example of a game in which breaking agreements is of paramount importance in order to win the game. Als, I don't think I will find enough players to actually play the game. But it is now part of the collection and that is okay too.

There is one thing which nearly made me throw the game into a blazing fire: 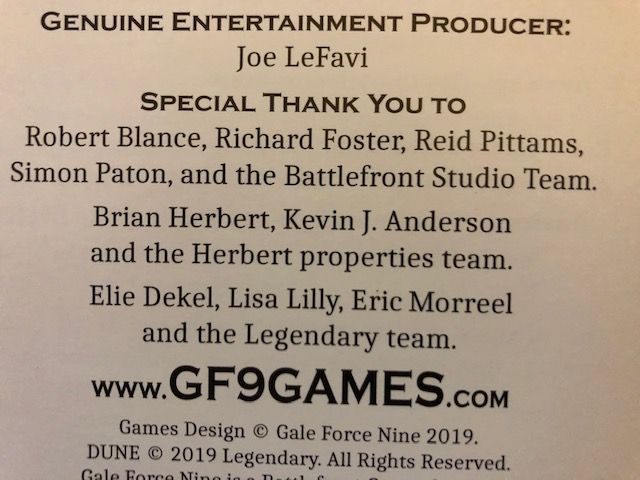 Nice! Mine is supposed to arrive on Thursday.

They had to thank the Herbert Estate and BH/KJA since they allowed them to reprint it. As I understand it, the game was in rights hell for decades.
"Oh, the devil will find work for idle hands to do."
Top

I once owned a copy of this, and for the life of me I don't know where it went to. I might have sold it on Ebay at some point. Unfortunately I don't remember liking it that much, but on the other hand I don't have any Dune fan friends IRL so there's no one to have enjoyed the flavor of the game with me either. This was ~15 years ago, mind you...
"um-m-m-ah-h-h-hm-m-m-m!"
Top

I keep wavering back and forth on buying this version. After seeing that little bit I think I'll pass. My original and expansions are better looking IMO.

Does the new version incorporate the expansions into the rules or is it just the original game? I agree about finding people to play. You really need six people all willing to learn the rules and take the time to play. But if you can it's nearly a perfect union of theme and mechanics in gaming.

I wish they would develop an online version so we could connect and play easily. I'd rather that than an open-world pay as you play mmrpg.
Top

It does not incorporate the expansions. It has also tweaked some of the base rules (reducing the length of the game to nine or ten turns maximum, for example, and I think I heard they made some changes to the treachery card deck).

I played it with an all-novice group (stuck in a cabin for a week, I was able to get six people to stick with the game for three days), and although we figured out most of the rules we must have missed some aspects of the strategy, because the game felt very static and sluggish. I think that was largely because you're only allowed to make one troop movement each turn, and often only one space, so it's very difficult to actually do much of anything. I think we were only able to mine like 4 spice collectively in the whole game, for example. Similarly, the ability to make and break alliances only when a sandworm card comes up meant that it played a fairly small role in our game, and nobody ever got the opportunity to use a traitor (most of the leaders were killed by the end of the game).

I did really like the battle mechanic, and the Dune flavoring of the gameplay and rules goes deep: it really feels like the characteristics of each faction is closely based on the book (to the point where they can be hard to explain to people who don't know it), and the focus on treachery and potential for devious strategies feels quite true.
Top

Thanks for the info CA. What they should do is reprint all the old General articles and supplements to the game. That could make a nice expansion all on its own.

Maybe after the film débuts there will be enough people willing to play the game. For a while at least.
Top
Post Reply
6 posts • Page 1 of 1