Glad you're ok mate! Any word on water, Red Cross or government trucks or anything? How's your bunch holding up? Do y'all have candles, oil lamps or flashlights?

Do you think there'll be more -than-expected looting?

Best wishes for you and your family!
Leto II is gone for good, except for OM. The "pearl" was just that; a miniscule portion of what Leto was, and not a compressed version of the whole. The pearl that the worms have do not make them Leto, or in any way similar to him.
-Omphalos
Top

Great to see you're ok, Teg.

Glad to see you're okay Mr. Teg. I'll be praying for your friend. Y'all be careful overthere.

What fear is there in the night?
Nothing, but that which is in our own imaginations.
Top

It seems fitting to post this here, Brancusi's Column of the Infinite, the terminator of his First World War remembrance.

Are you two safe from any fallout from those nuclear reactors ?

Glad you guys are okay.

The images are shocking. Can't imagine what people are going through there.

Hope you hear from your friend soon, Teg.
Top

You can't stop Sandchigger! Glad to hear everyone check in okay.
"I must admit, you have an astonishingly good idea there, Doctor...."
Top

Happy to hear you're (relatively) okay, Chiggie. Good luck with everything over these few days and weeks ...
"Anything I write will be remembered and listed in bibliographies on Dune for several hundred years ..." — some delusional halfwit troll.
Top

Glad to hear you guys are OK. You heard from your friend yet, Teg?
"You and your buddies and that b*tch Mandy are nothing but a gang of lying, socially maladjusted losers." - St Hypatia of Arrakeen.

chanilover wrote:Glad to hear you guys are OK. You heard from your friend yet, Teg?

Yes, my friend is okay.

I also just got off the phone with Chig.
His internet connection is still out but he said and I quote, "My internet is out but working on the next affront."

Last night one of the movie channels was playing

and I was watching it while falling in and out of sleep. Then in the morning I turned to the news and they were talking about the danger of radiation from the reactors in Japan and I thought, oh great, the radiation is going to wake up some kind of giant monster now and Godzilla will have to come to Japan's rescue and in the process destroy what's left.

chanilover wrote:Glad to hear you guys are OK. You heard from your friend yet, Teg?

Yes, my friend is okay.

I also just got off the phone with Chig.
His internet connection is still out but he said and I quote, "My internet is out but working on the next affront."

Glad to hear that he is OK. And can't wait to see what the bug is capable of coming up with with all this internet down-time.

The massive earthquake that struck northeast Japan Friday (March 11) has shortened the length Earth's day by a fraction and shifted how the planet's mass is distributed. A new analysis of the 8.9-magnitude earthquake in Japan has found that the intense temblor has accelerated Earth's spin, shortening the length of the 24-hour day by 1.8 microseconds, according to geophysicist Richard Gross at NASA's Jet Propulsion Laboratory in Pasadena, Calif.

Gross refined his estimates of the Japan quake's impact – which previously suggested a 1.6-microsecond shortening of the day – based on new data on how much the fault that triggered the earthquake slipped to redistribute the planet's mass. A microsecond is a millionth of a second.

The world's fifth-largest, 8.8 magnitude quake was caused when the Pacific tectonic plate dived under the North American plate, which shifted Eastern Japan towards North America by about 13 feet (see NASA's before and after photos at right). The quake also shifted the earth's axis by 6.5 inches, shortened the day by 1.6 microseconds, and sunk Japan downward by about two feet. As Japan's eastern coastline sunk, the tsunami's waves rolled in.
Why did the quake shorten the day? The earth's mass shifted towards the center, spurring the planet to spin a bit faster. Last year's massive 8.8 magnitude earthquake in Chile also shortened the day, but by an even smaller fraction of a second. The 2004 Sumatra quake knocked a whopping 6.8 micro-seconds off the day.
After the country's 1995 earthquake, Japan placed high-tech sensors around the country to observe even the slightest movements, which is why scientists are able to calculate the quake's impact down to the inch. "This is overwhelmingly the best-recorded great earthquake ever," Lucy Jones, chief scientist for the Multi-Hazards project at the U.S. Geological Survey, told The Boston Herald.
The tsunami's waves necessitated life-saving evacuations as far away as Chile. Fisherman off the coast of Mexico reported a banner fishing day Friday, and speculated that the tsunami knocked sealife in their direction.

(An energy map provided by NOAA shows the intensity of the tsunami caused by Japan's earthquake: Reuters/NOAA. Below, Satellite image of Japan's coast moving: NASA.) 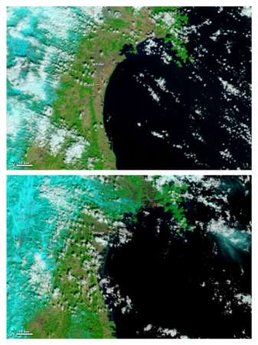 I just realized the scope of the disaster that has hit Japan...

I work for a Japanese company so I will definitely hear more about it tomorrow...

Again I am glad that no one we know was hurt but my heart goes out to everyone out there...

which previously suggested a 1.6-microsecond shortening of the day

shortening of the day ??
the way ??
Spice is the worm's gonads.
Top

The scale of the disaster is just horrendous. I'm overjoyed you guys there are okay.
WHAT IF YOU NO LONGER HEAR THE MUSIC OF LIFE?
MEMORIES ARE NOT ENOUGH UNLESS THEY CALL YOU TO NOBLE PURPOSE!
Top 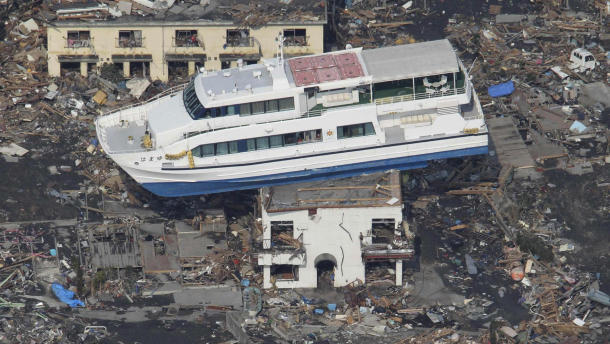 Now THAT is a well built house!

Well as I guessed work has come to a standstill for us, since there is a rotation between areas in Tokyo to get power

On one of the forums for the online game I work on we found the ultimate dickhead, the guy who complains about the servers being down and not being able to play !!!
(when every player will get his monthly subscription refunded)
Spice is the worm's gonads.
Top

(After the first few you get used to them, just stop the first second or so you feel one start, and then go on with what you're doing. The "rumble risers" the first day or two were the scariest, but you soon learned that they were all bark and no bite. The ones now just start as a gentle sway and then the shoji paper doors in the Japanese room next door start rattling in their tracks, and then a few seconds later it's over, no sweat.)

I think, from the kanji at the top right of the screen, that's Rikuzen Takata, up in Iwate. Total devastation.

I talked to a friend who works (worked) at a resource import company down near the port in Onahama. She was at work when the quake hit and said she lit out of the office as soon as the quake subsided (that was ONE LONG FUCKER, by the way; I didn't think it was ever going to stop); didn't even take time to change out of her uniform, got in her car and headed up the road—dodging the holes and raised blocks—towards Taira (the main downtown area around Iwaki Station), where she lives. She left so fast she forgot her cell phone... explaining why I couldn't reach her until I tried her home number tonight. Barely got out in time, from the sound of it. She's heading south with her sister tomorrow morning. Tried to get me to go along with them as far as Mito, but the uni's closed for the rest of the week (at least) and I don't want to impose on friends down there until it's absolutely necessary.

Watching the situation to see what develops next.

Holy Shit, Chig.
You've just had a 6.1 mag. shock much closer to Tokyo.

Why am I telling you stuff you already know?

Just worried about you all over there I guess.
Top

Why the hell aren't you guys talking about this?

http://theweek.com/article/index/213152 ... -chernobyl
Has not religion claimed a patent on creation for all of these millennia?
-The Tleilaxu Question,
from Muad'dib Speaks
Top

Kojiro wrote:Why the hell aren't you guys talking about this?

Well, pretty sure that's on everyone's mind, but as we are all aware, the situation is developing. Did you get that from the article? I mean sure, we could all go off half-cocked if we wanted, but who would that serve? K?

Watch and see what happens.

Well, so far it doesn't look like it's going in the right direction....
Has not religion claimed a patent on creation for all of these millennia?
-The Tleilaxu Question,
from Muad'dib Speaks
Top
Post Reply
95 posts