Adam Curtis is a film maker who has made some (actually, maybe all..) of my favourite documentaries. I thought about adding this to the conspiracy thread - because he does deal with some of the shadowy forces acting behind the scenes, but I think he deserves his own. The over-arching theory in his work is that whenever elites try and impose their ideology people it inevitably backfires and results unexpected (and often unintentionally humorous) consequences.

Almost all of his stuff is online - Probably the best 3 are: The Living Dead is about the power of the past - how Hitler used nostalgia in his rise to power and how the allies had to create a myth to explain the war that followed, then it goes into how the CIA experimented with brainwashing etc. The Power of Nightmares is a good one, about the parallel rise of the American NeoCons and Islamic extremists and how those in power use fear as a tool. and The Century of the Self is about how Freud's ideas infiltrated culture through advertising etc. The Trap is also quite good, it deals with ideas of freedom.

A Google Video search with the "20+ min" option checked brings them up:
http://www.google.com/search?q=adam+cur ... d=0CB0QpwU


The trigger for this thread is that I discovered his blog the other day and it's proper good - a right treasure trove of brilliant and interesting posts very much in the same vein as his films, but also some more random bits and bats - like a 60s documentary about the English chapter of the Hell's Angels - where they spend a rainy weekend on an abandoned barge, watch Doctor Who and generally lead very mundane lives.

It can be found at http://www.bbc.co.uk/blogs/adamcurtis/


(The Afghanistan category is what I've been working through today - it's quite a story. http://www.bbc.co.uk/blogs/adamcurtis/afghanistan/ )

Those sound pretty interesting, actually, thanks. I'll look them up.
"I must admit, you have an astonishingly good idea there, Doctor...."
Top

Just popped by this chap's blog and he's posted one of his old documentaries in light of the current problems they're having with the reactors in Japan.

The film shows that from very early on - as early as 1964 - US government officials knew that there were serious potential dangers with the design of the type of reactor that was used to build the Fukushima Daiichi plant. But that their warnings were repeatedly ignored.

The film tells the story of the rise of nuclear power in America, Britain and the Soviet Union. It shows how the way the technologies were developed was shaped by the political and business forces of the time. And how that led directly to inherent dangers in the design of the containment of many of the early plants.

ho-lee fuck, I remember this film - I'da figgered the guy who made it had been disappeared ...

just watched a good chunk of the embed video, may watch the whole thing, and, depending
on how I feel, do some commenting .... there's a significant chunk of this story that is AEC
disinformation .... but in overall terms, all that doesn't mean much ... if any of you actually
read thru my complete and accurate account of the Federal Military's use of the "UFO craze",
it's the same thing .... in other words, the public needs to be scared, of external and internal
threats (the enemy is alien(foreigner-alien, not E.T. alien); the enemy is the government)
simultaneously ... the public must fear threats so large they are helpless and must turn to
government (military) and they must also fear that government itself ...

so the easiest thing to do is manufacture a threat to cover-up the real threat (disinformation),
while planting news-stories that indicate government disinformation (fear/distrust) - but the
kicker is that it's double (or triple) disinformation ... the stories the media will run with always
indicate a third threat ("that's what they want you to think") ....

The over-arching theory in his work is that whenever elites try and impose their ideology {on} people it inevitably backfires and results {in} unexpected .... consequences.

I love me some of that; it's the only thing that makes me believe in Jesus sometimes ...
but I think the answer there is that no human empire has been able to last long enough
to fully implement their plans .... the population twists out of their grip for a second, they
revise and start beating down on them again, the population does that unexpected thing,
which throws off the timetable, all that has to be dealt with .... suddenly, fuck, the
empire's falling apart, there's a revolution, heads are rolled, and a new group of Masters
take over and starting beating on the population ... 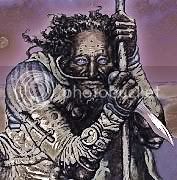 "...those with the darkest fears, became the most powerful."

great stuff
"I must admit, you have an astonishingly good idea there, Doctor...."
Top

watched the first two of these last night, let the third run and captured it, too ...

this one may be worth converting to mpegs, editing together, and burning to DVDs to pass
out to all my shitheel friends ... GOOD LORD the clip of Rumsfeld from 1975 and the laying
out of the fabricated lies about the Soviet "build-up" almost made me sick to my stomach -
how it was just fucking word-for-word what these SAME cocksuckers said about Iraq ....

I had tried to make that point nine years ago, that what these SAME cocksuckers were saying
then was the SAME thing they had said about the Soviets ... but none of my people would
listen, because for one, they didn't understand what I was saying - I didn't mean the SAME
general war-monger type cocksuckers, I meant the EXACT SAME COCKSUCKERS,
Rumsfeld, Wolfowitz, Cheney ... and two, those folks got their geo-political philosophies from
Rambo movies; you couldn't tell them that the "missle-gap" was a lie and Reagan did not
defeat the "evil empire" single-hand ...

I don't think I actually paid a lot of attention during the last bit of part two,
got to multitasking, but we got up to the part after the Kuwait Adventure
where Poppy Bush pulled a Kissinger on the neo-cons & wouldn't follow-thru
with an invasion and toppling of Saddam ... this guy seems to have the same
historical view as I've developed, so I'm interested to see if he agrees with me
that the Fahd's refusal to let Osama's army defend the HomeLand of Islam,
instead allowing the infidel army to trod on the sacred soil, is the key point in
Osama turning his attention from toppling the Arab dictators to toppling America ...

I've seen a lot of documentaries that expound on pieces of all this, but this may be
the first one I've seen that puts it all together so clearly; very surprised I've not
stumbled across it before, or had some one point it out to me ...

I've made the same point, going back to the 1980 Federal Election, about Strauss
and the agenda of the neo-conservatives; I've made some of the same points about
the nature and philosophy of the neo-jihadis since right after the Kuwait Adventure,
when everybody over here was waving flags - I was saying, nah, y'all done just fucked up
RAIL good, you done pissed off them crazy a-rabs ... and after the Iraqi Adventure,
they pissed off the rest of them ... and I had figgered out some of the progression of the
ideas going back to the Muslim Brotherhood during the Nassar era, but I did not know that
this was the work of one man ... the first section of part one, where he is in America in the
early 1950s and seeing an indulgent, shallow, selfish culture being born that could become
a danger to the entire world had me nodding along in agreement ...

what really gets to me tho, and I think that if I really, truly gave a fuck about the
world as a whole, or human society, or the north american culture (or the arab culture, for
that matter) I could get very, very angry is that all this horseshit, everything that has occurred
over the last fifty years to bring us to this point is the handiwork of such a small group
of fucktards with an agenda and philosophies so outside of "mainstream" thinking and
a rational view of reality, that they should have (both groups) been laughed off the stage a
long time ago ...
................ I exist only to amuse myself ................

I personally feel that this message board, Jacurutu, is full of hateful folks who don't know
how to fully interact with people. ~ "Spice Grandson" (Bryon Merrit) 08 June 2008
Top
Post Reply
8 posts • Page 1 of 1