Is There a Conspiracy?

The faucet in the kitchen sink died Sunday night, so I was tied down here this afternoon (normally Tuesday afton is my nude ninja aerobic disco time)(don't ask)(no, seriously, don't)(I mean it, I won't answer)(la la la la la) while the plumber-equivalent guy came and replaced it. Got bored pretty quick and headed over to trawl the Amazon forums...

And found my first interaction with Marilyn!

Thread: "SETI - Are They Missing The Obvious?"

You KNOW that? Pray tell us how.

In reply to your post on May 15, 2009 9:47 AM PDT
Marilyn Martin says:
Hello, Ronald. My statement, like a lot of astrophysics, is another "logical assumption" based on the mathematically-driven probability of billions of other planets out there that could support Life.

And Life is always evolving, based on Earth's history. So I have no problem with hypothesizing that there are "intelligent" mammalian, or other evolved species Out There.

I know it's the very first because, as the gracious hostess of an online high society salon, she greets me and calls me by name... It's a Marilyn trademark!

And as things turned out... it was loathe at first bite.

You do that, too?
"I must admit, you have an astonishingly good idea there, Doctor...."
Top

I bet my boys could get into that...

Funny. I heard that gaijin could not get that service.

Meh. I guess I sound convincing on the phone.

The bird and fish deaths have finally percolated down to the looney layers of society, but more on that sometime later. Some git (or group of gits?) calling him/her/it-self Spiritual Architect has been dumping a lot of text from books and other sites in two threads (obvious copyright violations out the wazooooo) and Marilyn has been commenting and asking questions. I was getting slaphappy last night and responded to three of her questions...

1) Mention is made of a Gray sub-species, "Beeletrax Grays". I've never heard of them before. Where are they from?

2) I've read and seen sketches of an upright preying-mantis ET, frequently seen alongside Gray abductors. So who are these guys? Another Reptiloid species?

They're the Grayside Mantoids. No, they're Insectoid. Just like the Terran praying mantis.

3) There is a battle ongoing in the Orion system. Probably one nasty Rep species pounding another. Do you have any information on this? (Not always, but there is that saying "The enemy of my enemy might be my friend.")

Not sure exactly what you mean by "the Orion system", but we have no reports of hostilities in that sector. (The only "pounding" going on seems to be of bottles of Nebulan Ale, back. And of hungover heads throughout the following diurnal cycle.) (That's an interesting saying. We have an olfactory signing meaning "The enemy of my enemy is very close to me and ... whoa, isn't this one ripe?!")

Made myself giggle, at least.

That is all that's important.

Ah English, the language where pretty much any word can have any meaning! - A Thing of Eternity
Top

The bird and fish deaths have finally percolated down to the looney layers of society, but more on that sometime later

are you talking about the thousands of black bird that fell dead out of the sky on midnight, new years eve, over Beebee, Arkansas ?

this is the original report from a local Little Rock station,
CNN and the others have taken a lot of this footage, so
you may have seen clips from this report - taken out of
context, too: two minutes in, there's the fat boy who's
"I ain't gunna take no chances" comment showed up
all over the place, after a newwhore makes a comment
along the lines "speculation continues that this is an
indication of 2012/Rapture prophecy" .... in context,
the fat boy said that regardless of what the game & fish
assholes said, that the dead bird carcasses were not
toxic or harmful, he wasn't letting his kids in the yard
until he got it cleaned up ....and the media wonders
why we hate them so ....

on the same note, the silly newsbitch who covered the story
in Beebee is not from Arkansas - and I say this with
confidence judging from his black NYC trench coat and faggot-shoes ...

the bird thing's only 4 four minutes or so -
for some reason, they posted the whole night's newscast,
with the commercials replaced with dead black space ...

and the weatherman, Todd Yakoubian, is from Arkansas; Cabot, in fact, just down the road from the site of
the New Years Eve Sign of the Impending Apocalypse from the LORD God-Almighty .... which is the only way
I can take this event .... I'm seriously considering taking the RV up there and setting up a tent-church in a
Wal-Mart parking lot and making some quick cash for all these trips I'm going to be taking this year to
national Civil War Sesquicentennial events ...
................ I exist only to amuse myself ................

I just saw on the news they're finding dead birds in Georgia now.

Dead birds in Georgia, how did they ever get here?

SandChigger wrote:[i]That's the night that the flighty things went down in Georgia!

SandChigger wrote:(Did I just date myself with that one? How many people got it without Monsieur's help?

yeah you're right I shall put a spoiler alert !
Spice is the worm's gonads.
Top 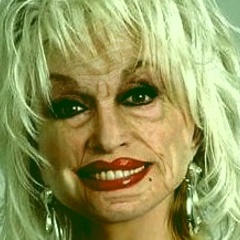 It's alive... aliiiiiive !!!
Spice is the worm's gonads.
Top

I really like Dolly. I grew up watching her on TV, performing with Porter Wagoner, and on the Grand Ole Opry, and for me HER "And I will always love you" will always be the original and definitive version. (Eat that, Whitney.)

I didn't do anything to the pic

Raises hand. Of course I grew up listening to old Johnny Cash, Dolly, and more records.

Regarding all the dead animals, I offer this explanation...

Perhaps we are seeing, in addition to other factors that I'll get to in a moment, a spike in the media reporting of animal deaths combined with a random statistical cluster of coinciding events.

Now, what do I mean by "cluster?" Imagine throwing a handful of pennies in the air and observing the pattern of how they landed together on the floor. You won't find a bunch of evenly-spaced pennies, but instead you'll see them cluster together in groups more or less. Now, no sane person could sit there staring at the largest cluster and conclude that something must have drawn these pennies together. Reasonable people understand that sometimes things just land in clusters.

So not only do I propose that we're seeing one such cluster in the form of mass die-offs, but I also think that it's a relatively new trend for the 24-hour news orgy to feature such events as top news stories. All it takes is the first couple instances: Birds and Fish in Arkansas. Now, "mass animal deaths" is suddenly on the news radar, and a very hot topic online. Then come flooding in the reports of so many other deaths, but you'll find that most of these are less significant. Would dead turtle doves in Italy make front page news over here if in normal circumstances? Nope. Sweden? Forget about it. Similar deaths could have (and I wager they definitely did) happened last year and the year before. The difference now is that every time one pops up, it's big news.

Not that it shouldn't be big news, I welcome the serious reporting on cases where large amounts of animals suddenly die. They should be reported on and investigated. Which brings me to the third factor: Climate Change. While every case should be looked at individually, climate change (and this is science and logic, not propaganda) will cause deaths in the long run via a variety of avenues. These being weather, ocean acidification, food supply, atmospheric conditions, etc. I'm not saying that this spike in deaths (if it even really is a spike) is the new norm and CLIMATE-DEATH is here to stay. What I'm saying is that science tells us climate-death is on a slow and steady incline, and we're experiencing a statistical cluster in occurrences, accentuated by a hyper-active media.
"The Idahos were never ordinary people."
-Reverend Mother Superior Alma Mavis Taraza
Top

OR it was the assholes who did THIS: Don't talk about our lunar squid brethren that way!

Every post on the Internet about lunar squid just increases their critical mass, slowly converting the WWW into a WMD!

I'd like to hear what newfacedancer has to say about this. I wonder if he's updated his website yet.
"If he was here to discuss Dune, he sure as hell picked a dumb way to do it." -Omphalos